The Art of Inspiration: Former Youth in Care, Preston Kirton Motivates Youth to Achieve Their Dreams 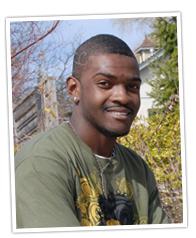 Preston was admitted to foster care at the age of 13 after concerns about his care were reported to CCAS because of his mother’s schizophrenia. His mother would keep him out of school for days at a time because she feared for his safety. As a result, Preston began to feel isolated, frustrated and confused. But even through the toughest times in his life, he remained hopeful and determined to succeed. With the support of his foster family, CCAS worker and a scholarship from the Hope for Children Foundation, Preston was able to achieve his dream of becoming a graphic designer.

Today, Preston is a college graduate, and runs his own successful freelance graphic design business, Urban Angels. Next, he plans on developing a line of clothing based on his artwork, and wants to give back to those who gave him a chance to dream. He plans on donating a percentage of sales from his clothing line to the Hope for Children Foundation’s Nelson Mandela Scholarship fund, so that children and youth like him can reconnect with their dreams.

The following is an excerpt from a speech written and delivered by Preston Kirton at this year’s Black History Month celebration held at CCAS’s Scarborough Branch:

Growing up in poverty, I often had dreams and aspirations that seemed out of reach and beyond my means. It was only until I came into the care of the Catholic Children’s Aid Society of Toronto and the care of my foster mother, Joyce that these dreams became a real possibility for me.

With all the accomplishments that I began to achieve in school, I realized that I was no different from the other kids in my class. I had the same drive, work ethic and ambition. The only difference was that I didn’t have the same opportunities as the other kids. That all changed when I came into care.

Hundreds and thousands of kids have their dreams taken away from them every day due to circumstances beyond their control. Out of the many, only a few are able to come out of these situations and find a way to strive for a better life than the one they grew accustomed to. For many others, this is not the case as dreams turn to nightmares and hope turns to horror. And for what? The lack of love. The lack of compassion. The lack of caring. The lack of opportunity.

That’s why the Nelson Mandela Scholarship is so important to me. It gave me the opportunity to achieve my hopes and dreams. It helped me attain a post-secondary education, and also gave me the opportunity to meet new people and make new friends. It helped me evolve from an uncertain child to a confident young man. Through the care and support of my loving CCAS foster mother, Joyce, and the Nelson Mandela Scholarship, I was able to complete my college education and pursue my career as a graphic designer.

I am now a self-employed graphic designer and entrepreneur, and I enjoy every minute of it because I love my work. All this was able to happen because an opportunity was given to me. When I was younger, I was uncertain about my future. My dreams were just what they were—far distant dreams. When they finally turned to reality, it was simply amazing! With all this being said, my advice to the younger generation is that when opportunity presents itself, take it, grab it, and don’t let it go. Your dreams, your desires, and your ambitions are all possible through focus, determination, and sheer will power.

We live in a time where many people are losing their jobs and houses due to the poor economy. We are going to see the bad, as well as the good. There are going to be times when after having received a scholarship you may still feel uncertain, afraid and alone. You may even feel like giving up. In one word I have your answer. Don’t! You have your dream. You have your vision. Now that you have the opportunity there is nothing that can stop you. In the coming of hard times and the coming of good times there will be youth looking up to you for inspiration and guidance. In their dark and uncertain times, you will become the light of tomorrow.

In closing, I leave you with a quote by Marianne Williamson, that embodies the significance of the Nelson Mandela Scholarship:

"Our greatest fear is not that we are inadequate. Our deepest fear is that we are powerful beyond imagination. It is our light more than our darkness which scares us. We ask ourselves... who are we to be brilliant, beautiful, talented, and fabulous. But honestly, who are you not to be so? You are a child of God, small games do not work in this world. For those around us to feel peace, it is not example to make ourselves small.

We were born to express the glory of God that lives in us. It is not in some of us, it is in all of us. While we allow our light to shine, we unconsciously give permission for others to do the same. When we liberate ourselves from our own fears, simply our presence may liberate others.”