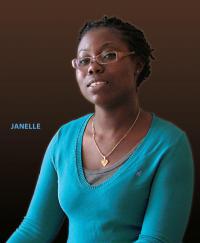 The nightmare was always the same: she was tumbling from one of Toronto’s tall office towers. At age eight, Janelle Younge did not want to move to Canada. Her night terror was symbolic of missing her mother, her family and the culture that was so supportive.

Many years later Janelle has rediscovered the support of the community through the Catholic Children’s Aid Society of Toronto. She is a scholarship recipient through the Hope for Children Foundation and because of the Adopt-a-Family program, she can give her two year old daughter Christmas gifts this year.

Janelle’s journey began when she was sent to live in the land of educational opportunity—Canada. “The place was cold, I didn’t know my family, it was traumatizing,” Janelle remarks, her eyes flashing with the meaning of words unspoken, “I didn’t want to be here…so I was bad.” Splitting up families where children live with family they do not know is a common immigrant experience. There are clashes over rules, expectations and discipline. “After several years, they were all fed up with me. I was overjoyed when they sent me home.”

In her native Guyana, Janelle revelled in the love and grounding influence of her mother and her family. “Everyone was surprised because I did so well, I was in the top school in the country. I wanted to be there.” Because she was a Canadian citizen she returned after two years.

This time she lived with the father she barely knew. There was one year of escalating arguments and clashes before Janelle’s father administered a beating so severe that it left wounds that appeared fresh even after three days.“ I called my mother. She said to save myself. I called Catholic Children’s Aid.”

The next two years saw her in two different homes before she lived on her own at age 16. Throughout her time in care, her worker and the Society encouraged her to maintain her relationship with her mother, sending her home to visit once per year. “Your foundation doesn’t change. Even though I was on my own I knew I had family, and CCAS supported that,” says Janelle. Her mother had instilled in her the value of education. After Janelle graduated high school she attended Humber College with the support of a scholarship from the Hope for Children Foundation. She earned her Social Service Worker diploma.

Education opened doors. Janelle began work in Toronto’s shelter system at different shelters in positions with increasing responsibility. In her last position, she was a case manager to homeless men, trying to help them work on and achieve a plan for stability much like her own journey. The program lost funding and that signalled a return to school. Once again with the support of the Foundation, she was able to take the next step, a degree in sociology from York University. “Because of the Foundation’s support, I never had to choose between education or food and a roof.”

Despite her capacity to plan and execute, the next adventure was unplanned. Janelle became pregnant and was ill during her pregnancy. She dropped out of school. Two years later, Janelle has returned to university with her two year old daughter at the centre of a new plan. “Everything I do right now is to secure her future so she doesn’t have to go through the things I went through.”

As a scholarship recipient, Janelle is also eligible for the Adopt-a-Family program. Janelle is clear about the important role of Adopt-a-Family, “you never know where life is going to take you. I’m not afraid to ask for help. When I’m in a position to give, I will give.” And just where does she hope life will take her? There is a Masters degree in Social Work in her future she hopes, once again with the help of the Foundation. She is thinking about opening her own business to teach life skills to youth. Her daughter will be pursuing her education. Her dream house will have a darkroom for photography and her art will adorn the walls. “When I’m ready for photography, I’ll take a course, because education never ends.” Janelle’s mom would be proud; her daughter has big dreams.