Youth Pursues Dream With Help From Hope for Children Fund 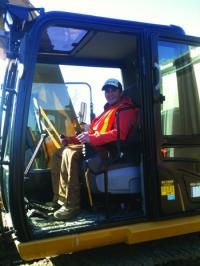 It was both the hum of his parents’ motor home and the smell of its diesel engine that Adam Dolson found exhilarating when he was a little boy. At least once a year Adam’s parents would start-up their motor home and head south, across the border to Myrtle Beach on family vacations. Sometimes they would stay there for as many as four months. It was trips like this that fueled Adam’s love for diesel engines and heavy equipment.

“There was just something about the sound of the motor home’s engine that was exciting,” says Adam. “I think it was because of the motor home that I started loving diesel engines.” But his love of big engines didn’t stop there. Adam also began collecting miniature tractors and machines.

Back then, Adam never dreamed that his love of toy tractors and construction machinery would lead him to where he is now. When Adam was just a few days old he was placed in foster care. He did not get the opportunity to know who his mother was, but his foster parents cared for him as their own child and they adopted him when he was seven years old.

After high-school, in a rushed decision to move on with his post-secondary education Adam enrolled in the Police Foundations program at Georgian College. “When I graduated my parents were tough on me to move on with my education. So I chose to do the Police Foundations program, but it wasn’t what I wanted to do. I just did it to make them happy,” says Adam. “But I just couldn’t see myself as a cop.”

So Adam took a year off school to explore what his real interests and passions were. “I wanted to figure out what I wanted to be and what I wanted to do with my life,” says Adam. Last summer he landed a job at a construction site and had the opportunity to work with heavy equipment; and that was it. “I got to fix machinery and I loved it. It took me back to my childhood and I just knew that was what I was meant to do.” Adam did some research and decided that he would pursue a career working with heavy machinery.

In January Adam started the Heavy Equipment Operator program at Fleming College in Lindsay, Ontario. It is a one-year intensive program which focuses on teaching students how to use construction site equipment, such as bulldozers and hydraulic excavators. “This course is something I have wanted to do and something that I have been looking forward to my entire life,” says an enthusiastic Adam.

Adam, like many other students, had to borrow money to be able to afford the cost of a post-secondary education. He received an OSAP student loan, but it did not cover the entire cost of tuition, rent and other living expenses. So when he heard about the Hope for Children Fund scholarship he was relieved to know that he would be able to get additional much-needed financial assistance.

Last year Hope for Children awarded 102 post-secondary scholarships to youth like Adam who were in need of additional assistance. “I think it’s important that people donate because there are many other youth in my situation and many who are worse off than me. It’s tough to be able to afford to go to school when your family has a low income. OSAP just doesn’t cover enough,” said Adam.

Adam is enjoying his program. This summer he will be on a four month internship at Strongco, one of Canada’s largest heavy equipment dealers and operators. He is excited about his internship and is looking forward to completing his certificate. “I am so relieved that I was able to get help from Hope for Children Fund, especially since this is money I do not have to worry about paying back. It’s awesome to have some relief to the stress of having more debt,” says Adam.

After graduating in December, Adam hopes to either work in the oil industry or in construction in Northern Ontario. “For me success is about digging deep down inside yourself and finding what you really like doing and putting a strong effort forth. It’s about me working hard and having a sense of fulfillment and this scholarship brings me closer to my goals,” says Adam.

To help other students like Adam, please donate to the Hope for Children Fund scholarship program. Visit www.hopeforchildren.ca/scholarships or call 416-395-1634.